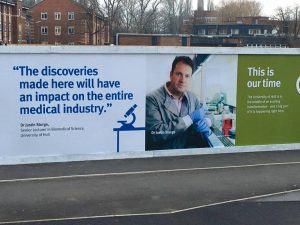 Trenbolone – What is it?

Trenbolone is an androgen and anabolic steroid (AAS) medication that is used in veterinary medicine, specifically to increase the profitability of livestock by promoting muscle growth in animals. Its off-label use by bodybuilders and athletes has been common since the 1980s.

Trenbolone is also an anabolic steroid that is used by bodybuilders to help them bulk up. The way it works is by increasing the production of protein in the body, which helps to build muscle mass. In addition, it also helps to increase the level of testosterone in the body, which can lead to increased strength and endurance. While there are some side effects associated with Trenbolone, such as hair loss and acne, many bodybuilders feel that the benefits outweigh the risks.

It has been shown to be effective in increasing muscle mass and strength. It is also known to be one of the most versatile steroids, as it can be used for cutting or bulking. Trenbolone is a good choice for bodybuilding because it is an anabolic steroid that can help you increase muscle mass and strength. Additionally, trenbolone is one of the most versatile steroids available, which makes it a good choice for those who want to bulk up or cut down.

﻿Trenbolone is a powerful synthetic anabolic steroid that is used by athletes and bodybuilders to help them bulk up quickly. Here are some of the main uses of trenbolone:

What does Trenbolone do to cardio?

Trenbolone, also known as “tren,” is an anabolic steroid that has been used by bodybuilders for decades. While it is very effective at building muscle mass, it can also have some negative side effects on the cardiovascular system.

But what is cardio? Cardio, or cardiovascular exercise, is any type of physical activity that elevates your heart rate. It’s important because it helps to improve your overall cardiovascular health and can help to prevent heart disease.

See also  Can You Start Steroids When You’re Older?

Cardio is important for bodybuilders because it helps to improve their endurance and stamina. It can also help to burn fat and calories, which can lead to better muscle definition. However, too much cardio can actually be detrimental to bodybuilding progress, so it’s important to strike a balance.

Steroids can also have an impact on cardio training. Some steroids can cause an increase in heart rate and blood pressure, which can be dangerous for people with cardiovascular conditions.

Also, Trenbolone is known to increase heart rate and blood pressure, which can put a strain on the cardiovascular system. In addition, trenbolone can increase cholesterol levels and triglycerides, which can lead to atherosclerosis (hardening of the arteries).

These effects are thought to be due to trenbolone’s ability to bind to the androgen receptor, as well as its strong interaction with other steroid hormones. Trenbolone should be used with caution in individuals with preexisting cardiovascular conditions or risk factors for cardiovascular disease. d blood pressure, which can put a strain on the cardiovascular system. It can also increase the risk of heart attack and stroke. In addition, trenbolone can cause cholesterol levels to rise, which can lead to atherosclerosis (hardening of the arteries).

While trenbolone can be a very effective steroid for bodybuilders, it is important to be aware of the potential risks before using it. If you have any concerns about your cardiovascular health, be sure to speak with your doctor before taking trenbolone or any other steroid.

A recent study published in the Journal of the American Medical Association (JAMA) found that Tren, a popular weight-loss drug, may reduce cardiovascular output.

The study, which was conducted by researchers at the University of California, San Francisco (UCSF), analyzed data from 14 clinical trials involving nearly 4,000 participants. The findings showed that Tren users had a significantly lower heart rate and blood pressure than those who did not use the drug.

While the exact mechanism by which Tren reduces cardiovascular output is not yet known, the UCSF team believes that it may be due to the drug’s ability to increase levels of norepinephrine, a hormone that plays a key role in regulating blood pressure and heart rate.

The findings from this study suggest that Tren may be an effective treatment for reducing cardiovascular risks in obese individuals.

Also, another recent study has shown that the popular steroid Trenbolone may have a negative effect on cardiovascular output.

This is concerning news for athletes who use the drug to improve their performance, as it could lead to heart problems down the line. The study’s authors say that more research needs to be done to confirm these findings.

In the meantime, athletes who are using Trenbolone should be aware of the potential risks and monitor their heart health closely.

So, what’s the truth? Well, there isn’t a definitive answer. Some studies have shown that trenbolone can be damaging to the heart, while others have found no significant problems.

It’s important to remember that everyone responds differently to steroids. Some people can take them without any issues, while others experience serious side effects. So, if you’re considering taking trenbolone, it’s important to speak with your doctor first and make sure that it’s safe for you.

Cardio health is often misunderstood. Most people think that as long as they’re getting their heart rate up, they’re doing cardio and healthy. However, there’s a lot more to it than that.

Ideally, you want to do some form of cardio exercise 3-5 times per week for at least 30 minutes. But if you’re just starting out, even 20 minutes 3 times per week can make a big difference. And as your fitness level improves, you can gradually increase the intensity and duration of your workouts.

Now we will discuss Trenbolone vs. Cardio health.

When it comes to bodybuilding, many different steroids can help increase muscle mass. Two of the most popular steroids are trenbolone and cardio. However, bodybuilders need to be aware of some major differences between the two.

Trenbolone is a much more powerful steroid than cardio. It is known for its ability to build muscle mass and strength quickly. However, it has several side effects, including hair loss, testicular atrophy, and acne. Trenbolone is also illegal in many countries.

Cardio, on the other hand, is a much safer steroid. It does not have the same side effects as trenbolone and is legal in most countries.

Also, there are many benefits to doing cardio exercise, including improved heart health and weight loss. However, some worry that too much cardio can negatively affect their health. For example, some research has suggested that marathon runners have an increased risk of heart problems.

So, what does the science say about cardio and its effects on the heart? A recent review of the research looked at studies that compared the health of people who did cardio exercise to those who didn’t. The review found that there is no evidence that doing moderate amounts of cardio is bad for your heart. In fact, there is some evidence that it may even be good for your heart.

So, if you’re worried about the effects of cardio on your heart health, you can rest assured that moderate amounts of cardio are unlikely to cause any harm.

But what if you had to choose between the two? Which one is better for your health?

Well, it turns out that Trenbolone – a type of anabolic steroid – may be better for your heart health than cardio.

A recent study found that Trenbolone can help improve blood flow and reduce inflammation in the arteries. This is important because it can help reduce the risk of heart disease.

So, if you’re looking for something good for your heart, Trenbolone may be the way to go.

In conclusion, Trenbolone is a powerful anabolic steroid that does have some risks associated with its use. It is important to be aware of these risks and to consult with a medical professional before using trenbolone. With proper medical supervision, however, the risks of Trenbolone can be minimized.

Bodybuilders secret to those bulkier muscles!!!

Bodybuilders secret to those bulkier muscles!!!